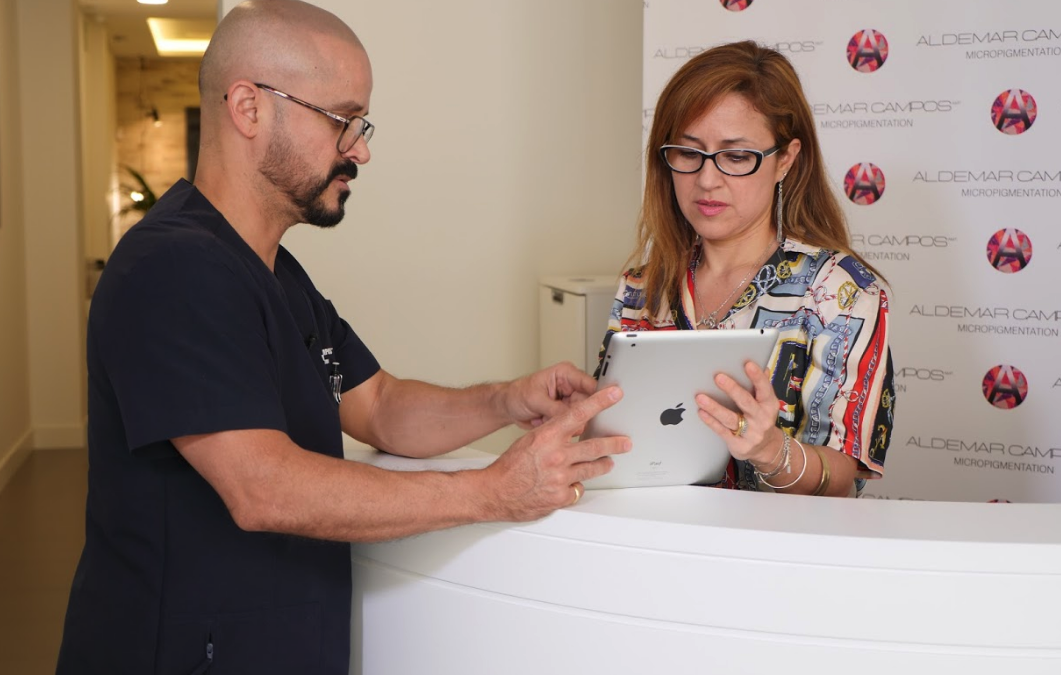 In its beginnings, more than a decade ago, Capillary Micropigmentation caused a great impact on an audience accustomed to more conventional treatments (and of little or no effectiveness) for hair loss, becoming an increasingly popular and accepted option due to the naturalness of this technique and the comfort it offers.

Until then, no results similar to those of today’s Micropigmentation had been seen, but there were other techniques that were obsolete for the same purpose, although not at all aesthetically successful. Due to this fact, it is common for many to use the term “tattoo” or “capillary tattoo” to refer to Capillary Micropigmentation. But it is not an appropriate term, because the differences between it and the traditional tattoo are very noticeable.

The main differences lie in the instruments used by the professionals, the pigments applied and, of course, the way to carry it out.

The machines we use in Aldemar Campos Micropigmentation, as well as the majority of professionals with recognition in the sector, are dermographs designed specifically for this treatment. Also the needles, which have a smaller diameter and different distribution than those used in the traditional tattoo, although it is true that there are tattoo artists, some of them of great prestige, who use dermographs in their works when they require their precision and lightness .

The dermograph allows the technician to deposit the pigment at the ideal depth to achieve the effect of shaved hair and that it does not degrade so that the appearance of the treatment deteriorates. In Micropigmentation, the deposit is made in a much more superficial way than in the traditional tattoo (which also makes laser removal much easier and faster)

Perhaps the most significant difference is that, for Hair Micropigmentation, the appropriate pigments are monomeric pigments, while inks are used to tattoo. As inks, they are formulated on the basis of several different pigments, and often contain additives to keep the mixture stable, in addition to large particles of heavy metals such as iron oxide. With the passage of time, solar radiation and the gravitational effect of the planet cause these particles to break, leaving their original components separated, the smallest being the first ones that our immune system will drag with them, causing the particle remaining in the skin no longer the same. For this reason it is common for traditional tattoos to blur and lose clarity, this is what is called migration. In the worst case it may even turn blue or green, if this is not good for a tattoo … for a Micropigmentation treatment it would be a nightmare.

On the other hand, this does not happen with the pigments used in Capillary Micropigmentation which are formed exclusively by particles of monomeric structure, which means that they will never migrate or change color. Of course, they also degrade over time, although in a much more discreet way. These pigments simply descend very gradually by gravity, so that their particles are dragged by the immune system as they move from the original deposit and thus, the Micropigmentation treatment does not undergo another change apart from being clarified. That is why it requires a touch-up after a few years.

Once again, the Aldemar Campos Micropigmentation team recommends choosing professionals with proven experience and that guarantee one hundred percent natural and successful results, for which it is essential to use the appropriate materials.